#INDIANB : after 9 months of consolidation, now... 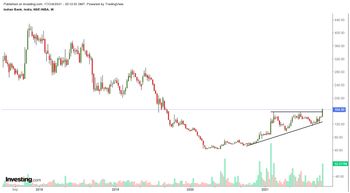 Long term INDIANB rating by FrontPage users
4.7/5 (3 Ratings)
Find answers to all your questions on live INDIANB message board: Is INDIANB buy or sell? Should I buy INDIANB shares? Why are INDIANB shares falling? Should I invest in INDIANB stock?
Join FrontPage

FrontPage is India's favorite stock discussions community
Join 2,00,000 Indian traders and discuss trades, strategies, news & views on any stock.
Join FrontPage
SOURCE: Data from D'Market via Quandl. Intraday data delayed 15 minutes.
DISCLAIMER: Information is provided "as is" and solely for informational purposes, not for trading purposes or advice, and may be delayed. Information herein should be regarded as a resource only and should be used at one's own risk. This is not an offer to sell or solicitation to buy any securities and FrontPage will not be liable for any losses incurred or investment(s) made or decisions taken/or not taken based on the information provided herein.