ayushmaansingh
Reputation: 4,962  •  Sep 23 5:32 AM
After the US Fed hike, the RBI will decide the fate of the rupee in the next two days
Rupee at 80 may be transitory if we look at recent history. Every time the rupee crossed this line, there was an intervention to stabilize volatility. Today's currency market is driven by one stunning feature - the dollar-euro relationship - which tends to put relentless pressure on all currencies. The US Federal Reserve (Fed) has raised rates by 75 bps and indicates that the rate will exceed 4% to 4.4% by the end of the year. This means that the dollar will continue to strengthen and there will be a collateral impact on other currencies.
The rupee is already under pressure from a widening current account deficit (CAD). It can grow by up to 3-3.5 percent per year.
The Reserve Bank of India (RBI) has played a key role in managing the rupee. There has been an obvious sell-off in the market, as evidenced by the decline in foreign exchange reserves. Measures taken in the forward market of about $19 billion by July and about $36 billion in the spot market (which would increase in August) helped stabilize the rupee.
Hence, a lot will depend on the RBI's action in the next two days to set the tone for market behavior. Rupee is one of the best performing currencies and RBI is setting a target with its actions. If it sits, the 81 mark will be tested. That's how the market will work.
#NIFTY50 #MacroEconomy #Forex
❮
❯ 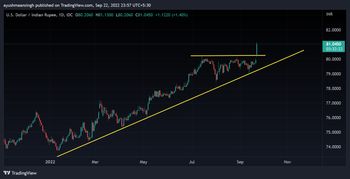 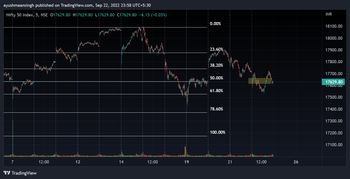